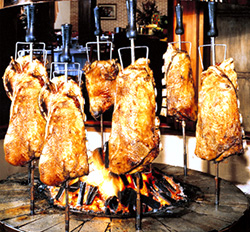 It happened sooner rather than later.  My mettle was tested last week at work.  My team was being treated to a Brazilian steakhouse for lunch and I was invited.

If you’ve never been to a Brazilian steakhouse, you sit at your table and the waiters bring various meats on a large skewer to your seat.  There is no à la carte menu.  Before starting my journey to becoming a vegan, I would’ve leaped at the chance to go.  Instead, the offer left me conflicted.  This restaurant  is very expensive, so upper management was being very sincere and generous in taking us out to eat there.  On the other hand, it’s a meat-centric dining experience and goes against the grain of what I am trying  to achieve.  I’m not really a salad bar type person, so tagging along just for that was not an option.

I was left with a choice.  Go to lunch and violate my principles, or politely decline explaining my decision.  All the advice I received was to take advantage of the free meal, but my personal ethics are worth more than that.

I started my transition to veganism last month.  Since then, the thought of consuming animal flesh is becoming less appealing as time goes by.  I have read that this is a very common side effect.  I was not sure if I was going to be sickened by the sights and smells of the meat being brought around to the table.

In the end, I politely declined the invitation.  My work spouse was kind enough to let the powers that be know that my decision was based on my dietary preferences rather than a personal snub.  Management was very understanding of my personal ethics in the matter.